Negroamaro is a red wine grape widely grown in Puglia, Italy. It is used in a number of DOC regions, perhaps most famously in Salice Salentino. 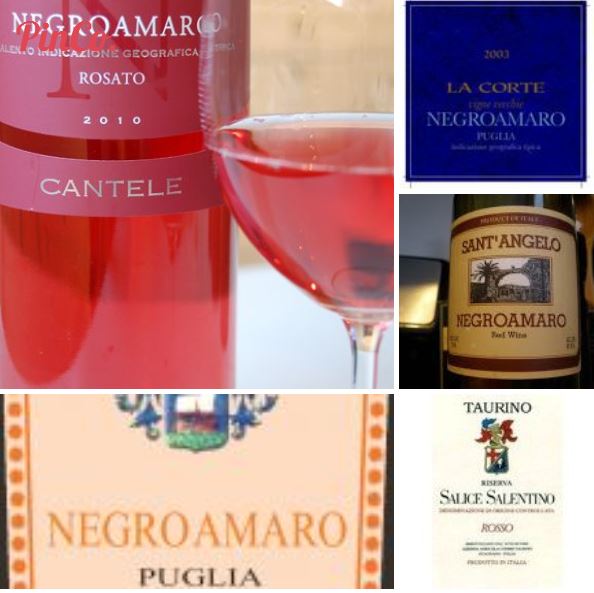 The Taste of Negroamaro

Negroamaro can be made into big heavy wines, but with care it an also make wines which are delicate and aromatic.  In fact some of the best rose wines I have tasted are made from Negroamaro and you can also get sparkling pink Negroamaro.

Negroamaro is used in varietal wines and in blends with other Puglian varieties such as Primitivo and Malvasia Nero.

The name is supposed to mean "black bitter" and this puts some people off from trying it. The black part of the name at least is accurate, but the bitter part is questionable.  Red wines made from Negroamaro are often astringent but they can also be a little sweet and aromatic.

Some of the DOC regions which use Negroamaro are Alezio Brindisi, Copertino, Galatina, Leverano, Matino, Salice Salentino, Squinzano. You can find out where these regions are using De Long's Wine Map of Italy.

Negroamaro has its own wine festival in Brindisi

Most Italian wines are best served with food.  This is especially true of wines made from this variety. Negroamaro can be enjoyed with simple pasta dishes or pizza but it is worthwhile trying to find something typical of Puglia or Southern Italy.

Here are three suggestions for authentic Puglian recipes from Sandro at Feudi di Guagnano. All are ideal for pairing with Negroamaro wines

Do you have any suggestions for food pairing with Negroamaro? Leave a note below.